Forty-six third year students started their D of E journey in August and many of them have been working hard during their Monday after school sessions towards their Bronze Duke of Edinburgh Award. They have put up tents, learnt how to use a compass, played map symbol bingo and started planning their expeditions. We have run First Aid sessions, including CPR with the Annie manikins and what to do in all kinds of emergencies. Our next few months will be spent organising the groups and getting ready for the practice expeditions which will be on 29th/30th April or 13th/14th May.

In the time between the sessions, the young people have been taking part in lots of activities to fulfil the volunteering, physical and skill sections of the Award. They have organised their own voluntary work at a variety of places include riding for the disabled, Brownies, sports coaching, after school clubs and helping with the archives at Family History Borders. For the physical and skill sections they have been fishing, canoeing, curling, fixing bikes, horse-riding as well as playing instruments ranging from piano to bagpipes. As well as clubs in school such as chess and choir, we have been lucky that 2 volunteers (Miss Wilkie and Mrs Muller) are running a baking and photography club for the Duke of Edinburgh pupils, which have been very popular.

A group of seven fourth years are preparing for their canoeing expedition. They’ve already been on the Tweed at Kelso as part of their training and are looking forward to a follow up session at the beginning of March. The expedition itself will be from Peebles to Berwick over three days with the two nights camping under canvas. It is a tremendous challenge for them and one which will no doubt test not just their canoeing skills but their team work, determination and communication.

Meanwhile, lots of Senior pupils are continuing to complete Bronze and Silver Awards by uploading their evidence and completing sections. Mrs Farnish and Mr Jarvie are on hand every Wednesday lunchtime to support students with their Award work. 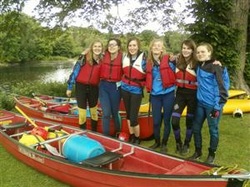 In June a group of fifth years completed their training expedition for their Silver Duke of Edinburgh Award. It was an exhausting three days of canoeing and the group covered 56 km along the Tweed.

There were no luxuries at the end of each day though as they camped along the way. Luckily the weather was pretty kind and the girls didn’t capsize – well one of them did – twice!!

It was great fun and the girls are looking forward to their assessment weekend in August. 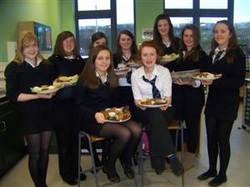 Eager S3 bakers have been busy learning new skills as part of their Bronze Duke of Edinburgh Award. The Skills section requires young people to develop skills in a chosen area and a small group of third years have spent the last three months studying baking.

Every Thursday after school, they have been working in the Home Economics room to learn about different baking techniques. The culmination of their training was evident at last night’s S3 Parents’ Evening, when the group offered their home-baked cakes and tray-bakes to the staff and parents. One parent noted that they were superb ‘mobile cake stands’ and they were a lovely touch to the parents’ evening.

The groups offered beautifully decorated cup cakes, chocolate tray-bakes, tiffin, banana bread, muffins, shortbread…..just about any type of cake imaginable! Well done to the group and congratulations to them for completing this section of their D of E Award.