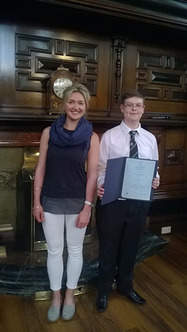 On Friday 12th June, S6 pupil Stuart Munro attended an awards ceremony at the Royal College of Physicians and Surgeons of Glasgow after being shortlisted as one of the top 16 young writers in Scotland.  The Scottish Schools' Young Writer of the Year Award was open to 16-19year olds and Stuart fought off competition from over 200 hundred entrants to secure a place at the inaugural awards ceremony.
On the night, Stuart received a commendation for his bold non-fiction article 'Books, not Blockbusters'.  The judges were impressed with Stuart's articulate and stylish use of language and felt his voice deserved recognition and the chance to be shared with a wider readership.
As a result Stuart's work will be published in the Scottish Review, one of the country's most eminent literary publications - a very fitting award for an eminent young writer.
Well done Stuart!

SHAKESPEARE IN A DAY

Last week, our English teachers took us down to London to visit the Globe Theatre. We left Earlston early in the morning and took a coach to Berwick. We then got the train down to Kings Cross and got the underground which was incredibly fast and crowded and, for me a totally new experience.

We walked through the teeming streets of London crossing the Millennium bridge taking pictures along the way. We congregated at the Tate Modern gallery and sat down to have lunch before walking to the Globe Theatre.

The theatre looked spectacular and we enjoyed an excellent performance of ‘Romeo and Juliet’ which was enhanced by the dramatic open air layout. In the globe you are very close to the action of the play and not just an onlooker. This feeling of intimacy together with the history of the building made this trip a very special experience.

After the show we made our way back to Kings Cross and left for home. Although the journey was a long and tiring one it was well worth it and an experience which will live long in the memory.

Inspired by one of Scotland's finest

The Borders home built by one of Scotland's best-loved writers has been providing inspiration to a new generation of authors.

Sir Walter Scott penned some of his most famous work at Abbotsford House in Melrose.

A group from Earlston High School recently spent time in its grounds as part of a competition that could see their work published.

View the clip from ITV news

Twas a night of rollicking banter and proud patriotic wit – twas of course the Burns Supper.

The esteemed Mr Kidd kicked off the proceedings with his signature ‘groan-inducing’ humour and introduced each speaker and musician throughout the evening.

Kilt – clad Ruairidh piped in the top table with great gust, while everyone sat down ready to enjoy a superb evening of entertainment.  Depute Head Boy – unfortunate Hull City supporter – Joseph gave a splendid rendition of the Selkirk Grace, before Ruairidh returned to stylishly pipe in the haggis.  Slightly biased co-author of this article, Chris McCall followed with the traditional ‘Toast to the Haggis’ recited with precision and a great accent!  The awaited feast followed, a delicious three course meal of vegetable broth, haggis neeps and tatties and lastly some excellent shortbread and tablet.

After belts were loosened and waistcoats discarded (that’s right Mr Kidd!), Dr Gillian Arbuckle followed with the Immortal Memory, an interesting insight and witty account of the gent Robert Burns’ life and works. An absolute highlight of the night was Tam O’Shanter, an astonishing rendition recited and acted out by the infinitely charismatic Derek Inglis.  The crowd was enamoured throughout the twenty minute tale of Tam, in which Mr Inglis effortlessly blended drama and humour to create a fine masterpiece of showmanship.  Rabbie would have been proud!

Fifth year students Becky and George were up next with a lovely performance of Neil Gow’s Lament.  Then it was finally time for the Head Team.  Head Boy Calum was up first, his ‘Toast to the Lassies’ filled to bursting with witty quips, and rib-tickling recounts of past stories.  Rachel, Head Girl, not to be out done responded with the ‘Reply from the Lassies’ matching Calum’s smart, funny banter.

Depute Head Girl Rhona rounded off proceedings with a ‘vote of thanks’ for the great people who made the fantastic evening possible. A final rendition of ‘Auld Lang Syne’ brought the very entertaining Burns’ Supper to an end. Everyone went home, more nostalgic, patriotic and perhaps with a well-rounded belly!

Congratulations to Georgia from Miss Coleman’s English class on her winning entry in the Young Writers’ Creative Writing Competition – Mini Monologues. Georgia was inspired by the school’s creative writing club, which takes place every Wednesday lunchtime with Ms McDougal. She says, ‘I couldn’t have written it with their encouragement – Thank You!’

A monologue is a piece of oral or written literature, such as a story or part of a play, spoken by one person who exposes inner thoughts and provides insights into his or her character. The character speaks out their thoughts about a specific event or situation. Monologues are always written in first person narrative.

The challenge for Georgia and the other entrants into the competition was to write a mini monologue – just 100 words!

Georgia chose Harry Potter as her character and her monologue is printed for you to enjoy: ‘Inside Harry Potter’s Head’. It will also be part of a collection to be published in April  ‘Mini Monologues - Authors from Northern Ireland, Scotland and Wales’.  Georgia told us, ‘I am really pleased I entered this competition and I really enjoyed writing the monologue. It has inspired me to write more.’

Inside Harry Potter’s Head    by Georgia
They call me the boy who lived.
They’re wrong.
I am the boy who was cloned.
It all happened so quickly. Lily and James Potter desperately wanted another child. They knew Voldemort was rising and looked desperately to new forming Genetic Science to clone the boy they already had, Harry Potter – the one before me.
They were all killed by Voldemort that night. The plan had been to pretend that I was Harry’s twin, since he was now gone I had to be Harry Potter. I was put in the cot and from then on I was Harry – the boy who lived.

The Creative Writing Club has known a great deal of success since it began back in 2011, with individual writers receiving recognition for their creative talents in a variety of competitions. Some writers have even had the pleasure of seeing their own work published as part of a collection, something which is both an impressive achievement and an honour for any creative writer.

Whilst many worthwhile competitions exist, perhaps one of the most prestigious creative writing competitions in Scotland is the ‘Inspired? Get Writing’ competition run by the National Galleries of Scotland, in which entrants are invited to choose a piece from the permanent collections in any of the galleries and use it as inspiration for creative writing. Open to every school pupil in Scotland, the stakes are high and competition is notoriously fierce. So, with that in mind a collection of EHS pupils submitted their superb entries to the competition in January hoping for success. Finally, after months of waiting, success arrived. Eve (S3) was awarded runner up in the 15-18 age category, chosen from a staggering 700 entries. Eve’s subtle, haunting poem ‘A Child’s Fantasy’ inspired by William Bell Scott’s painting ‘Una and the Lion’ was given the recognition it deserved and Eve received her moment of glory at an awards ceremony held in the National Gallery – a suitably impressive venue for such an impressive achievement.

However, the celebrations didn’t end there. Eve was also given the opportunity to return to the gallery, accompanied by a group of pupils for a private tour and workshop with renowned Scottish poet Liz Niven. This was an incredibly special prize and a fantastic opportunity for the Creative Writing club to actually work with a writer, share ideas and seek advice. For the creative writing club – this was a sublime opportunity.

So, on Friday 26 th April, 16 members of the creative writing club journeyed to the National Gallery (chauffeured by the splendid Mr Kidd, who provided the on-bus entertainment) where we were welcomed into the gallery and embarked on our private tour. We were encouraged to analyse a range of paintings and all pupils engaged in interesting discussions about the texts. The sensitivity, insightfulness and depth of the young writers’ contributions to the workshop were exemplary and a real indication of their creative abilities. We worked closely with Liz Niven, exploring, evaluating and editing our writing. Pupils then shared their work and listened to the poet herself as she shared some of her poetry with them. It was a rich morning of imagination, vision and celebration leaving every pupil inspired in some way to do what they do best – to write.

Ultimately, we have Eve to thank for this opportunity and I look forward to seeing her poem published in the gallery’s beautiful publication ‘Inspired? Get Writing’ and I truly hope our success as a group continues.

A Child’s Fantasy
I caught a lion yesterday.
He came to me, you see. Not the other way around.
I bribed him with innocence and pale dreams
A grandmother’s jacket, sewn with fantasy
That I was growing too old to believe.
I will keep him lost in my own dark woods –
An inverted fairy tale –
His head too fine to mount upon a wall.
EVE S3