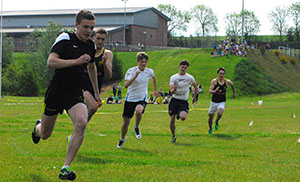 On a day of scorching sunshine, it was Leader house who retained the Earlston HS Sports day trophy with a victory over second place Eden (debuting in the competition as our newest House). With a firm surface, there were some quick times on the track.  Robbie Wilson (Teviot) scorching to a 12.6 S1 100m, Heather Panter (Turfford) leading the S1 100m race in 13.5 and Mathew Pender's dip on the 100m line to defeat Nic Janus ( Leader-12.7 sec), Lara Howard (Eden) winning the S1 200m (29 sec) and Chloe Richardson's (Leader) hat-trick at 100m/200m and 400m in the S4 girls  particular highlights. Leia McKinnon (Eden) was untouchable over 100m/200m and 400m for the senior girls.

In the field, there were some very credible wins in shot put, discus, long jump and high jump from the sports winners. A very strong high jump of 1m 42 from S2's Shannon Taitt, a long jump of 4m 15 from S1's Anna Changleng (Teviot), and a discus from Hannah McGowan (Teviot) at 19m all winning their events in style were the girls highlights. The boys were also performing well in the field with John Brotherston of S3 jumping well at 1m 50cm, Padraig Gillan (Tweed) throwing a 22m discus and George Johnson (Teviot) long jumping 5m.

Another highlight proved to be the Health run. All pupils in S1 to S5 were challenged to run continuously for 12 minutes around a course set up around the campus. There were a few red faces in the heat, but the challenge was met on the whole!

The proceedings concluded with some very competitive relay races and it was the Senior Boys win that cemented the title for Leader house. All of the events were officiated by the school staff and Mr Changleng, event organiser and chief referee on the day, commended them all for their accurate and robust measuring and recording that made the event run so smoothly.

S2 pupils thoroughly enjoyed being part of the Chef's@school programme when Chef Liam Bruen from The Red Lion Hotel in Earlston volunteered to demonstrate some professional cookery skills to our young people last Friday.

As a trained pastry chef, Liam enthralled the pupils with his expertise in producing the perfect pastry for pies and savoury quiches alongside stunning chocolate work which pupils had the opportunity to attempt in order to decorate their baked cupcakes - great fun had by all involved!

Congratulations to Lizzie Clelland in fourth year, who was competing for Earlston High School at the Scottish Schools Swimming Championships on Saturday 31 January in Aberdeen.  She swam incredibly well to win a bronze medal in the open 400m freestyle race with a new PB also.

Lizzie is a very talented swimmer and trains incredibly hard each week. Five mornings a week she is in either Galashiels or Selkirk pool at 5.30 am for a 2 hour 15 minute training session. Then there’s school in between before heading back to the pool two evenings a week, at Kelso Swimming Pool this time, for further training. Lizzie trains as part of the Borders Elite Swim team and is also a member of Kelso Amateur Swimming Club. She has been competing since she was eight years old and currently ranks as the top Scottish 15 year old the 200m front crawl. Her time is 2.05 – incredible!

Lizzie takes some of her inspiration from swimmers like Rebecca Adlington but has also been influenced by Commonwealth athlete Lucy Hope from Jedburgh, with whom she used to train. She’s definitely one to watch out for!

The fifth and sixth years following the Sports Leadership course have had a busy start to the term. At the beginning of January, they completed the HeartStart Training with Keith and Angela Farnish. This taught them basic CPR and other emergency life-saving skills.

HeartStart is a programme organised by the British Heart Foundation, which gives young people and adults the opportunity to learn skills to help deal with emergency situations. Using ‘Annie’, the CPR mannequin, the EHS seniors practised their skills in CPR as well as learning how to cope with heart attacks, choking and bleeding. Mrs Farnish praised the students, ‘It was an excellent group of seniors – they all listened well, were very focused and enthusiastic’. Each student was presented with their HeartStart certificate at the end of the two hour course.

Then the following week, Neil Renton, Borders Sport and Leisure Trust Development Officer, delivered sessions on athletics and taught pupils the basics of leading and athletics sessions to primary-aged children. They are now finely tuning their skills before their next teaching placement at Earlston Primary School: teaching a 6 week block of athletics to primary five pupils. Well done and good luck with the remaining part of the Sports Leaders Award.
BARCELONA HOCKEY TOUR

Spirits were high as 34 senior pupils and 3 members of staff boarded the banter bus which would take us on our journey down to Liverpool Airport. We were all relieved when our cases were under the weight limit when we checked in at 4 am and then made it safely through security.  Before we boarded the plane there was just enough time for a few squad photos and to consume a hearty full English breakfast.  After a quiet flight we arrived in Barcelona Airport and got off the plane to experience a surge of warm Spanish air – it was wonderful. The baggage claim was a walk in the park (thankfully!) as all 37 suitcases, 2 stick bags and 2 goalie kits had safely arrived at their destination. We were met by Laura, our tour rep, who took us to our international tour bus which transported us to Agua Hotel Montagut in Santa Susanna.
On arrival we spent some well-deserved time lounging at the pool in preparation for our two games of hockey. On Sunday morning we ventured away from the hotel and explored Santa Susanna to see its quaint shops and to immerse ourselves in the Spanish culture. After a cheeky mocktail and a browse around the shops we went down onto the beach for more photos and a paddle in the sea! Having worked up an appetite we sat down both evenings to an all you can eat continental buffet.
On Monday we headed back up to Barcelona to explore the city. We met Conchie – our tour guide for the day- who first took us on a short, yet fascinating, walk up to the breath taking Sagrada Familia. It was truly beautiful and even after over 100 years of construction it is still not complete.  We then got free time to explore Las Rambles where we could do a spot of shopping and grab some lunch. Then we travelled to the Nou Camp where Barcelona play football. It was incredible! We received a tour around the stadium, changing rooms, press rooms and the trophy hall before having a chance to get a photo with the one and only Lionel Messi!! The pitch was pristine and the changing room had all the modern equipment.  In the evening the ‘B’ team played Junior Hockey Club and the ‘A’ team played Atletic Terrassa Hockey Club.  Both teams took a while to adjust to the water based pitches and playing in the sunshine against very strong Spanish teams.  However the girls played some great hockey and the scores were 1-3 and 3-3 respectively.   We then returned to the hotel where the dining room staff had laid on a cold buffet for us to enjoy.  Having been away from the hotel for 13 hours it was safe to say we all enjoyed our sleep that night!
Tuesday, unfortunately, was cloudy and very overcast. However, this did not prevent us from enjoying our final day.  Some of us played in the pool and joined in the activities organised by the Hotel Entertainment Staff while others walked back into Santa Susanna to buy “designer” sunglasses and handbags at the local market.  In the evening both teams travelled to Mataro to play against teams from Iluro Hockey Club.  The games were physically and mentally harder than the night before but with lots of encouragement from the side lines both teams raised their game and played their best hockey of the season so far.  Although the ‘B’ team lost their game and the ‘A’ team drew their game both teams were pleased to come away with the results that they did.
Sadly, the following day we left the hotel. After 11 hours of travelling we made it back to the school. Everybody was still on cloud nine because the tour had been such a great success and we all had a wonderful time!
We would like to take this opportunity to extend our grateful thanks to our sponsors Qube GB Ltd and Adam Purves Recovery who provided us with our playing and training tops respectively.  Last but not least we would like to say a huge and well deserved thank you to the members of staff who made the tour possible and as enjoyable as it was. In particular, Mrs Lawrence who spent vast amounts of time organising and planning the tour.
Hannah and Rachael (S6)

Once again the Staff vs. S6 challenges were in abundance at Earlston High School today. In an effort to raise a Stash of Cash for Sport Relief. Some of the staff and sixth year pupils took to the stationary bikes to see how many miles they could cycle from 11:10 to 1:45pm. With each teacher cycling for a solid 30mins whilst the sixth years were doing a mere 5 minutes each. They were situated in the prime spot outside the assembly hall to attract the attention from passing by students.

The cycle challenged commenced with Ben Magowan taking on the mighty Mr Kidd who was replaced after a hefty 30 minutes on the bike by Mr Henderson. Jenny Bond and Alexis Green did a brilliant job of organising the event along with Miss Pate, both Alexis and Jenny did their bit and had their 5 minutes on the bike.

Overall it was an extremely successful event and we were able to raise over £86.00 not including selling 360 sports relief wrist bands for £1 each making a whopping total £446.00. We hope all involved enjoyed the event and we were able to raise awareness of the issues Sport Relief help with within the school. The Staff ended up brilliantly annihilating the pupils cycling 45miles to the pupils 36miles.