SON OF A SPY - DRAMA GROUP 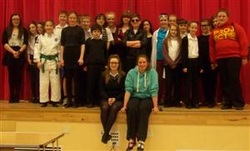 On the 30 th of April, friends and family of the Earlston High School Drama group saw a performance of “Son of a Spy”. The play was written and directed by Earlston High’s Head Girl, Grace Gilbert and she was assisted in the monumental task of directing a large number of S1 pupils by “Wee Grace” – Grace Rhatigan in S5.

The play was brilliantly entertaining. 22 S1 pupils were funny, dramatic and accomplished in their telling of the story of a school boy spy’s attempts to defeat the evil geniuses at his school.

Grace Gilbert moves onto study drama and English Literature next year. We wish her well and look forward to Grace Rhatigan continuing the work with the drama club next year.
Powered by