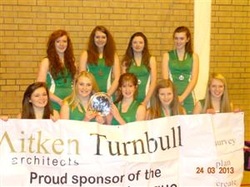 Congratulations to the U15A netball team who won the Border District League Plate Final last week.  The girls played against Berwickshire U15B and the score was an excellent 20 - 5 to Earlston. 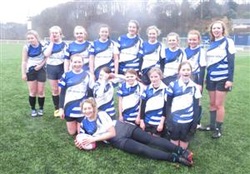 This term has seen the launch of an exciting new extra-curricular activity – Girls’ Rugby. Interest and participation amongst all year groups has been increasing each week and we now have over twenty girls training twice a week.

Fifteen of these girls attended a local girls’ rugby 7’s tournament over at Netherdale rugby facilities. Despite the chilling wind and wet weather, the girls gained a lot from the afternoon games. The Under 15 squad won one out of their three games whilst the Under 18 squad combined with some girls from Eyemouth High School to play three friendly games over the course of the afternoon. For all but one, this was the girls’ first experience of playing competitive rugby and it was very clear that they all grew in confidence and are now looking forward to their next fixtures.

The girls are also being taken up to Murrayfield Stadium this Friday (15 th) to watch an Under 15 final being played between Langholm RFC and Auchterarder. One of Earlston High School’s own, Lauren, will be representing Langholm in the final and the girls are very much looking forward to going up to support her.