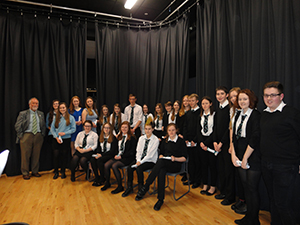 On Monday 28 March, Earlston High School held its annual Celebration of Success Evening. Following last year’s inaugural event, this was another fantastic occasion and a wonderful opportunity for the school to recognise and celebrate a wide range of student achievements. The awards included Junior and Senior subject champions across all areas of the curriculum, community awards, work experience, college course commitment, volunteering, Duke of Edinburgh awards, dedication to school clubs, service to the school and school values awards.

Those on the school Hall of Fame, who have achieved success at a National level, were also recognised on the evening. It was pertinent that the Hall of Fame Champion for 2016, Ciara Donlevy, was not able to collect her award as she was training abroad with the full GB trampoline team!

Comperes for the evening were the S6 Head Team of Adam Flannigan, Sophie MacBrayne, Lauren Meager and Connal Howard, bringing glamour and panache to such an auspicious event.

The guest speaker was Rob Moffat, Head of PE and Sport at Merchison Castle and a former teacher at Earlston High. Rob gave a very powerful and inspirational talk, highlighting the importance of wider achievement and a positive attitude as being key aspects for youngsters in reaching their career goals.

The House prizes were also given out and, as well as recognising individual successes, the winning House for the session was announced. Much to the disappointment of the aghast Tweed house captains, the house shield was won by Eden house and collected by House captain Jayde Cooper and Sports captain Ross McConnell.

The night ended by awarding the Team of the Year prize to the group who went to Peru in June last year. These students did an incredible job in helping poverty-stricken communities in Peru. The school was delighted that the efforts and dedication of this group were also recognised on 24 March at the Saltire and Inspire Awards in Galashiels, where they were presented with the Inspire Volunteering Group Award.

The Celebration of Success was enjoyed by a large crowd and plans are already in place for the next one in 2017. 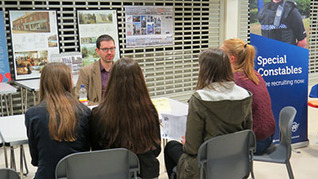 Last night (Thursday 26 November) a new event was held at EHS – A WORLD OF WORK EVENING. Aimed at parents and students from S3 upwards, it was a superb opportunity for the students to meet representatives from the world of work and to discuss a range of relevant aspects including qualifications, skills and qualities. The representatives also shared with the students their own career pathway, their training as well as the challenges and rewards of a career within their sector.
Whilst the students were spending time with the employers, their parents attended an information session in the hall and heard from a range of guest speakers covering all 8 routes to employment: work, university, college, modern apprenticeships, volunteering, training, work experience and setting up your own business.
After a tea break, the parents and students joined together to revisit any of the representatives’ tables to ask any further questions.
Just about every career sector was covered and we are indebted to the guest speakers and employers for giving us their time and sharing their knowledge with the students and parents. The event was an excellent addition to the EHS calendar. As the students begin their preparation for the Senior Phase curriculum, it was an excellent opportunity for them to consider their options for the future and a whole new world has now opened up to them.

link to the Digital Review -shown at Celebration of Success Evening 30 March 2015
Celebration of Success Evening 30 March 2015  - Photos and Programme available by clicking on the relevant links
LEAVERS EVENING 2015
At Leavers’ Evening earlier this month, the School Citizen, Community Citizen and ‘The Good Egg’ Awards were presented. Nominations from teachers and the wider community determine who receives these special awards. The School Citizen of the Year was presented to Archie Kidd. As a senior student, Archie was astounding contributor. He not only achieved very highly academically, he also set an example of leadership and responsibility which was an inspiration to young people. He worked with pupils at EHS in order to develop their literacy skills. He was also ecstatically worshipped at Melrose Primary where he motivated young people, by his excellent example, to develop their health and wellbeing on the sports field - before taking them to the library, where he encouraged them, with equal success, in the development of their minds. Archie was presented with the School Citizen of the Year for 2015.

Mhairi Milne was presented with the Community Citizen Award in recognition of her volunteering. Mhairi has completed over 700 hours of volunteering with the British Red Cross and Borders Pet Rescue, gaining many skills and certificates in the process.

The ‘Good Egg’ Awards went to Daniel Kaczan and Sophie Farnish. Daniel has been a superb asset to EHS as a lighting and sound technician for school shows, concerts and the annual fashion show. He has also supported the school discos and dances. Sophie’s award was for her contribution to the S1 Activities committee. As chairperson, Sophie organised a trip to Edinburgh Zoo for 175 first year pupils as well as a drama workshop. Her organisational skills are first class and the junior pupils benefitted from her leadership of the committee. 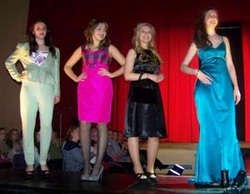 Congratulations to the Parent Council Sub-group for another fantastic event: Wednesday 19th March and the Fashion Show Extravaganza. The refectory had been transformed into a bustling market place with stalls from local shops and craft centres. With nearly twenty stalls the market place was a colourful array of handbags, scarves, handcrafted cards, scented candles, gifts for Mother's day, hand-made toys, ballet tutus, candy and clothing. There was something for everyone!

And when the purse was empty, on hand were some health and beauty specialists to help you relax and enjoy a bit of pampering.

The fashion show itself was so professional - the models glided down the catwalk to showcase the beautiful clothing and accessories. Again there was such variety with items from: Sarah Thomson, ROAM, Chapel Street Store, Hunters, Twelve, LA Bridal and New Look in the first half.  Joining them in the second half were models wearing strips from Melrose RFC and clothing from Cloud 9, Liberty Star Trading & Murray Hogarths, LA Bridal and Guardian of Scotland.

As if all this was not enough, just before the interval, Melrose Primary School choir performed a couple of songs. Wow - they were amazing and added another special moment to an evening of fantastic entertainment.

A huge thank you to the Parent Council Sub Group for organising the evening and to all the stall holders and staff and sixth years models.

Leavers’ Evening is a celebration of school careers and achievements. It’s a graduation style rite of passage for all Earlston High School leavers: fourth, fifth and sixth years. A glitzy affair, complete with red carpet and Oscar style entrances – the EHS leavers’ ceremony is one not to be missed.

Guests were welcomed on Friday7 June to celebrate with the Class of 2013. The evening was hosted by Mr Robin Chapman (Depute Headteacher) as MC. Miss Strong (Headteacher) was the first of the formal speeches and concentrated on “The Next Chapter”. However, she had plenty of tales and snippets of stories of the previous chapter: stories of curry Thursday, common room antics, romance and sporting glory against the staff football team.

Special guest was Mrs Mary Brown, one of our Maths teachers who retires next week after twenty five years at EHS. Mrs Brown is a gem and will be sorely missed by staff and pupils. She greeted every leaver as they approached the stage, gave them her warmest congratulations and presented each student with their Record of Achievement. She then shared a few stories of her own with the audience. Her affection for EHS and its students was clear as she admitted that she too would miss EHS, but like the leavers, was starting a new chapter and looking forward to her retirement.

Grace, Jack and Lucy from the Head Team spoke about the past year and the committee and charity work of the sixth years. Later in the evening they cut the celebration cake and Jack and Grace started the snowball waltz in their own unique style. Mrs McDonald congratulated the leavers and the Head Team before presenting Grace, Jack and Lucy with their paper weight gifts. The evening concluded after the buffet and lots of dancing!

Another tradition is the presentation of two awards – the Service to the School Award and the Service to the Community Award. These special awards are sponsored by the Freemasons in Earlston and this year’s winners were Ben Cunningham & Liam Paton Day (Service to School) and Alannah Elliot (Service to Community). In addition to these presentations, the senior management team added a new award – for “Common Sense and Good Humour’. This was presented to Matthew Donaghy, who was always on hand at school to help out whatever the occasion and always with a friendly smile and plenty of enthusiasm.